Illuminati: New World Order is a game that tells the future, or so many people believe.  With very few exceptions, the theories as to the game’s remarkable precognition lie firmly in the realm of secret knowledge, not mysticism.

INWO evolved from the original Illuminati card game published in 1982.  It was designed by Steve Jackson (who had previously co-created The Fantasy Trip series of combat games, edited The Space Gamer RPG/miniatures magazine, and designed the futuristic combat game Car Wars) and allowed each player to represent a different secret conspiracy out to control the world.  The Bavarian Illuminati, the U.F.O.s, The Network, The Servants of Cthulhu… each group could win by either controlling enough cards or by completing a special victory condition.  Players were encouraged to make in-game deals with each other to influence the game’s progress.

In 1990, the Secret Service raided the office of Steve Jackson Games in a famous example of governmental overreach and overreaction.  From Wired:

Austin was a hotbed of pioneering Internet activity in the early 1990s, and one event that put us on the Internet map was the March 1, 1990 Secret Service raid at Steve Jackson Games, an Austin company that produced role playing games with science fiction themes.

All the company’s computers were confiscated, and as a result Steve Jackson sued the U.S. Secret Service, and won. The raid and court case made Steve a focus of the nascent cyber liberties movement – it was the first major case for the national Electronic Frontier Foundation, and subject of a bestselling book by Bruce Sterling, called _Hacker Crackdown_.

The reason for the raid was a concern about cybersecurity.  From Steve Jackson Games:

(I)t became clear that the investigating agents considered GURPS Cyberpunk to be “a handbook for computer crime.” They seemed to make no distinction between a discussion of futuristic credit fraud, using equipment that doesn’t exist, and modern real-life credit card abuse. A repeated comment by the agents was “This is real.”

GURPS stands for “Generic Universal Role Playing System”.  It allowed players to use the same rules for fictional adventures in settings ranging from Conan the Barbarian to Star Trek… not exactly the clear and present danger that typically initates a Secret Service raid.

But because of the raid and because of the successful Illuminati game, some began to suspect that Jackson KNEW things.  After all, the argument went, would the government really be so incompetent as to be unable to differentiate between reality and an RPG?

(For an “unrelated” aside, let me direct you to Representative Hank Johnson’s concerns about Guam tipping over.)

Nevertheless, the answer from many was “no.”  Whispers grew about what was “really” behind the SJ Games raid.

Fighting the legal battle to regain seized material drained funds from the game company.  In 1993, however, a champion appeared in the form of a new game published by Wizards of the Coast: Magic, the Gathering.  This card game encouraged players to build customized decks which would then be used in direct battle.  Expansion cards were randomly placed into small packs which were available for direct sale.  The combination of simplicity of play and complexity of available decks & strategies made Wizards millions of dollars shortly after the game’s debut.

Steve Jackson wanted some of that money, he merely needed something to stand out from the many other imitators who were chasing M:tG cash.  Luckily he had a beloved card game property, he merely needed to tweak the game mechanics for person-to-person and customizable deck play.

Enter INWO.  Like the original game, it had groups and organizations that were to be controlled; in the new version, though, actions that changed gameplay could be used.  The card designs were taken from real life: the George Bush card, for example, had the President refusing to eat broccoli.  The Al Gore card had him hugging a tree.  Bribery showed a handshake with dollars being transferred between the hands.  And Terrorist Nuke featured the Twin Towers being destroyed. 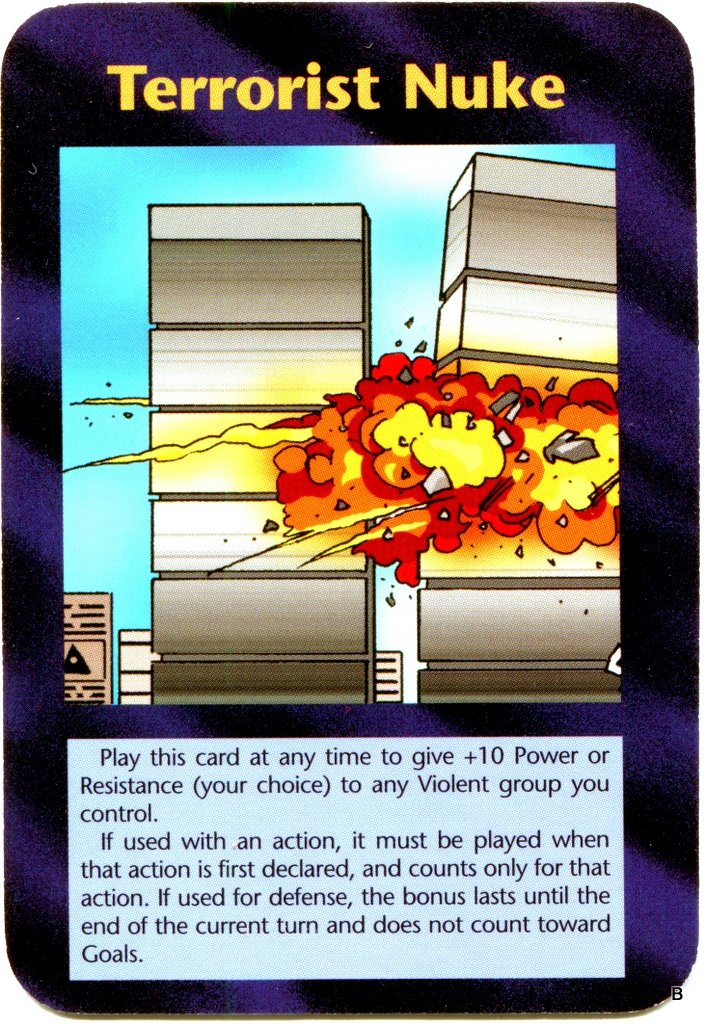 There could obviously be no explanation for this outside of deep knowledge.  Well, except for the fact that it doesn’t say “Terrorist Planes” but “Terrorist Nuke”, and the explanation provided by an editor for the game company:

The INWO card was of course inspired by the 1993 attack on the World Trade Center, when a terrorist group attempted to bomb them. Yet unsurprisingly, certain kooks can’t remember back 20 years and have thus decided that it must have been a premonition of the 2001 attacks. <eyeroll>

I admit, I’ve made money off of this conspiracy, because one of the cards could be said to have “predicted” Pizzagate, which was debunked last week: 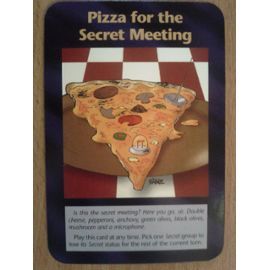 That one sold through very well for me, but far fewer are  interested in the MAGA hat on the Dittoheads card: 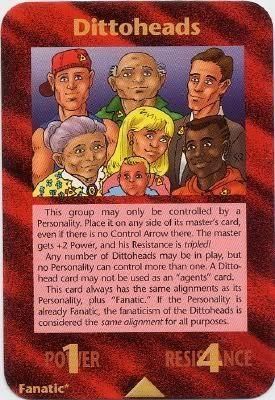 If only Jackson had been willing to show the front of that famed red cap… but he did show the Pentagon, after it was hit! 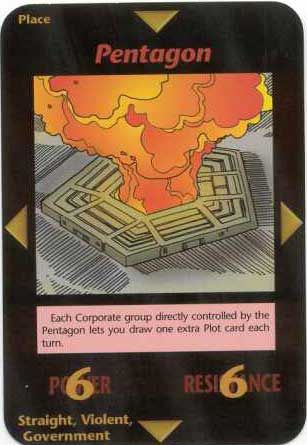 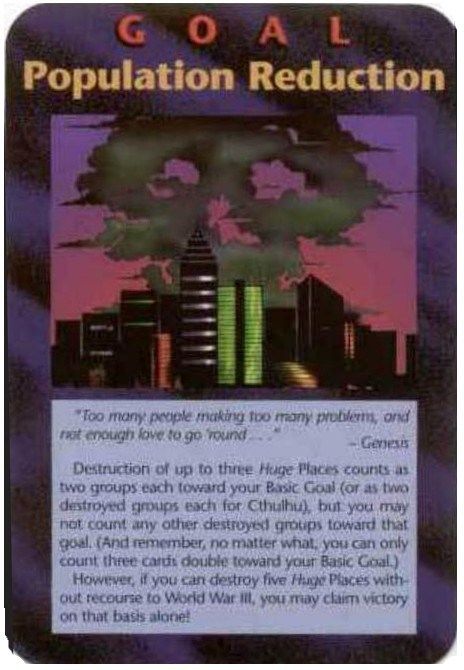 There are more.  There are MANY more.  I could spend hours (and considerable bandwidth) showing them to you… but there’s no need.  First, you can find examples by using your search engine of choice (just remember to include “Truth”, or you’ll get a bunch of reasonable people talking about a game) and second…

…it’s coincidence, and people seeing what they want to see.

For example, in the Pentagon picture above, there is no damage to the side of the building, but it does mimic a bomb explosion… because it’s the Pentagon.  In Population Reduction, they chose the largest, most densely populated and most recognizable American skyline for the background.  Pizza for meetings is commonplace, and pizza deliveries as a way to get information are a staple of spy movies dating back to the 1970s, with the trope even being inverted for the beginning of Deadpool.  A backwards hat is a simple image choice for a younger, casually-dressed man, and red contrasts the background nicely.

When people want a result, they can often stretch to find that result, even when the facts aren’t there.  That is a danger to rational thinking, and the INWO cards provide an excellent method of deconstructing unreasonable theories for those who might be on the verge of granting them credibility.

And if someone believes it anyway, at least you have a fun game to play with them.

About AlienMotives 1991 Articles
Ex-Navy Reactor Operator turned bookseller. Father of an amazing girl and husband to an amazing wife. Tired of willful political blindness, but never tired of politics. Hopeful for the future.