Vice President Mike Pence told Christian Broadcasting Network’s David Brody that there is a lot of prayer going on in the White House, encouraged by the President.

For a while now, CBN News has reported how evangelical Christians have unprecedented direct access with President Trump. It has led to input on policy and consistent prayer among Cabinet members. Pence says there is prayer going on inside the White House all the time, not only on the National Day of Prayer.

“There’s prayer going on on a regular basis in this White House. And it’s one of the most meaningful things to me, whether it’s public meetings or not, I’ve lost count of the number of times that the president has nudged me, or nudged another member of the Cabinet and said, ‘Let’s start this meeting with prayer,'” he told Brody.

During the National Day of Prayer event at the White House on Thursday, President Trump announced the creation of a faith-based office which will inform the administration of any “failures of the executive branch to comply with religious liberty protections under law,” Pence told CBN.

President Trump spoke on the topic of prayer in the Rose Garden during the event.

“Prayer changes hearts and transforms lives. It uplifts the soul, inspires actions and unites us all as one nation under God. So important. And we say it here. A lot of people, you know, they don’t say it. But you know what? They’re starting to say it more, just like we’re starting to say ‘merry Christmas’ when that day comes around. You notice a big difference between now and two or three years ago? It was going in the other direction rapidly. Right? Now it’s straight up.

Our country was founded on prayer, our communities are sustained by prayer, and our nation will be renewed by hard work, a lot of intelligence, and prayer.”

A screen shot of the President’s Twitter feed from May 3rd displays the juxtaposition of the day’s tweets: Above, a tweet about National Day of Prayer; below, the third in a thread of tweets explaining the hush money payment to Stormy Daniels. 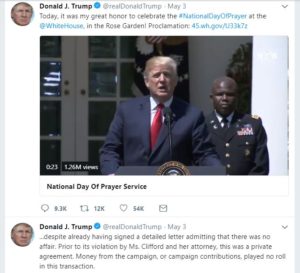 John Adams said, “Our Constitution was made only for a moral and religious people. It is wholly inadequate to the government of any other.”

When asked  during the campaign if he has ever asked God for forgiveness, Donald Trump said, “I’m not sure I have. I just go and try do a better job from there. I don’t think so. I think if I do something wrong, I think I just try and make it right. I don’t bring God into that picture.”

Matthew 7:16 might be a good verse to revisit on this day after the National Day of Prayer.