The peace summit scheduled for Wednesday between North and South Korea have been suspended via KCNA, (Korean Central News Agency). (Independent.)

The suspension of the talks according to KCNA, is in response to a joint air drill, between South Korea and the United States, that has been happening since May 11th.

The statement goes on to say, “Public opinions at home and abroad comment that the maneuver is the largest-ever and a reflection of the invariable stand of the U.S. and south Korea to persist in the “maximum pressure and sanctions” against the DPRK.”

The “Max Thunder” drill is an annual event held between the U.S. and South Korea for military training purposes.

The statement also goes on to threaten the upcoming June 12th summit between President Trump and Kim Jong Un. “The U.S. will have to think twice about the fate of the DPRK-U.S. summit now on high agenda before a provocative military racket against the DPRK in league with the south Korean authorities.”

Martyn Williams Senior Correspondent of of IDG News Service and founder of North Korea Tech Shared the Statement VIA Twitter:

The official English report from KCNA is out: pic.twitter.com/4Qyq9Zvsa6 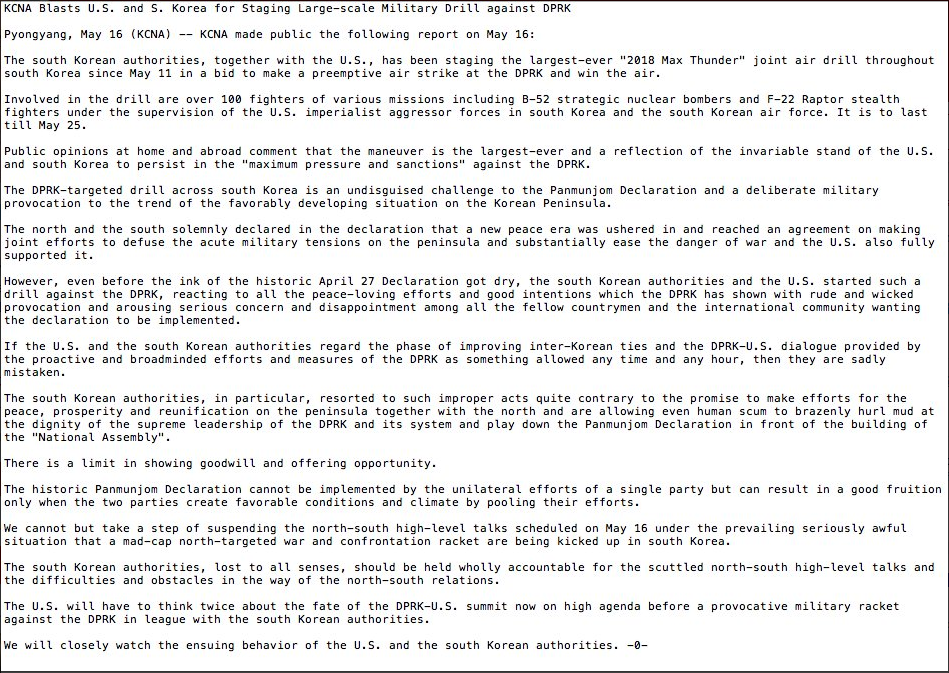 This is a developing story more details will follow.

About Tiff 1231 Articles
Member of the Free Press who is politically homeless and a political junkie.