President Trump is disliked in Scotland, despite it being his mother’s birth nation.  A comparison of politicians and world leaders taken in the country last year gave him just over a 20% approval, the lowest among all of the available choices. (Scottish Sun)

There are many reasons.  One is his nationalistic policy, which is more in keeping with the traditional European “right wing” than traditional American “right wing” politics.  Right-of-centre (spelling intentional, as we’re looking at EU “right”) politicians aren’t especially popular in Scotland, where their Green Party currenly holds dominance.

Another was his Brexit flub.  From 2016, his tweet regarding the historic vote: 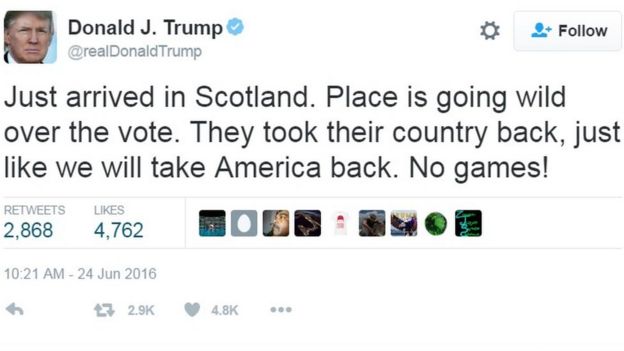 At issue is the fact that Scotland overwhelmingly voted to remain in the European Union.  They were so much in favor (at 62%) of remaining that they nearly swung the overall vote. (BBC)  At a point when tensions were high and emotions were raw at their recent failure, to have their position completely mischaracterized was not conducive toward good relations, and likely shifted some who were ambivalent about Trump toward disfavoring him.

Then there are his Scottish golf courses.  They are hemorrhaging money, despite Scotland being the ancestral home of golf and a tourism destination for golfers worldwide.  Per CNN:

Trump resigned as director of the Scottish companies before his inauguration in January 2017, but remains the owner via a trust set up when he became president. His son Eric is a director of both resorts.

So, despite not having direct control over the day-to-day operation of the resorts, the ownership and name remain and the family retains control.  This is important because the resorts have been the focus of negative attention, even as some locals praise the Trumps for providing jobs.

Examples include the attention given to tax breaks the resort had claimed (Independent), environmental issues caused by broken promises (Guardian) and now…

If you’ve never heard of the drink, you’re not from Scotland.  It’s the unofficial national drink, a carbonated soft drink that historically beats even the ubiquitous Coca-cola for sale.  It even has its own tartan.  (Scotsman Food and Drink)  It has a distinctive neon orange color that is highly visible and is a source of Scottish pride.  And now it is banned in Trump resorts.

Unsurprisingly, there is an uproar from some of the Scottish.  The same people who decry Trump’s nationalism are now stepping up to promote their own nationalistic traits.  Trump, specifically, is being described in most of the UK papers as behind the decision to ban Irn-Bru sales despite the decision having far more likely been made at the managerial or even Don Jr. levels.

Are you fucken kidding me. He really is a monumental bellend. https://t.co/nqvHGso57n

And, of course Irn-Bru themselves:

Donald – some things
you CAN get away with,
others

There is an excellent reason for the ban, though.  It is provided by one of the resort managers:

“We can’t have it staining when to replace the ballroom carpet would be £500,000 alone,” Turnberry general manager Ralph Porciani told the Ayrshire Post. “We have villas here with Irn-Bru stains in the carpets which I can’t let.”

This is a completely reasonable position.  Few restaurants are carpeted because of the inevitable costs of removing unsightly stains.  Attendees paying for temporary residence in an extremely expensive resort expect that level of consideration, and to that end disallowing easily spilled neon-orange dyed soft drinks is the logical position.  It seems surprising that the decision has taken so long to come about, but for the devotion of the Scottish soda drinkers.

About AlienMotives 1992 Articles
Ex-Navy Reactor Operator turned bookseller. Father of an amazing girl and husband to an amazing wife. Tired of willful political blindness, but never tired of politics. Hopeful for the future.