What is a Tri-Tip Roast?

The official answer is…

Fairly tender, boneless and triangle-shaped. Separated from the Petite Sirloin/Ball Tip and Sirloin Bavette/Flap of the Bottom Sirloin. Should be sliced across the grain when cutting into steaks or after cooking. Unique item for smoking or BBQing that is most popular on the West Coast.

My answer is that it’s roughly 2.5 – 3.5 pounds of lean but very flavorful, melt in your mouth, deliciousness.

Ok. So what’s this Santa Maria thing all about?

A website called Santa Maria Valley has a nice lengthy run down of the History of Santa Maria BBQ. I’ve compiled key bits of information from it, so we can hurry up and get to the yummy part.

The roots of Santa Maria Style Barbecue date back to the mid-1800s, when large ranches occupied the hills of the Santa Maria Valley. Local ranchers would host Spanish-style feasts each spring for their vaqueros, or cowboys, as well as family and friends—barbecuing meat over earthen pits filled with hot coals of red oak, which is native to the valley.

In those early days, the favored cut was top-block sirloin. Then, as today, the meat was rolled in a mixture of salt, pepper and garlic salt before being barbecued over the red oak coals, which contribute a smoky, hearty flavor. In the 1950s, a local butcher named Bob Schutz perfected the tri-tip, a triangular bottom sirloin cut that quickly joined top-block sirloin as a staple of Santa Maria Style Barbecue.

Their history also had a tidbit I found particularly interesting.

If it’s good enough for the Gipper, I’m in!

Mix well and store in an empty spice jar.

Not only is this a great Rub for Tri-Tip, but also an excellent seasoning for Grilled Chicken and Fajitas!

Let’s Put it all Together

Select a nice 2.5 – 3 pound tri-tip roast from your local butcher or grocery. Check that it doesn’t have any extraneous fatty chunks, as there is plenty of marbling throughout the cut anyway.

Generously rub about 1/3 – 1/2 of the Santa Maria Rub Mix(per 3 lbs. of meat), on the roast, making sure to cover the meat completely in rub.

Refrigerate for approximately 12 hours (prior to cooking). I cannot express enough how much of an important difference this step makes.  Sitting for 12 hours allows all those spices infuse with the meat and do their job of tenderising and making it wonderfully flavorful.

Whether you use charcoal, wood, propane, or any other method, make sure you set up your grill with 2 distinct areas. One for High Heat (searing) and the other for Low Heat (slow roasting).

Sear the Roast on the “High Heat” portion of your grill for about 5 -7 minutes a side. Look for slight charring but not burning. You want a to build up a nice crust but you don’t want to eat charcoal. 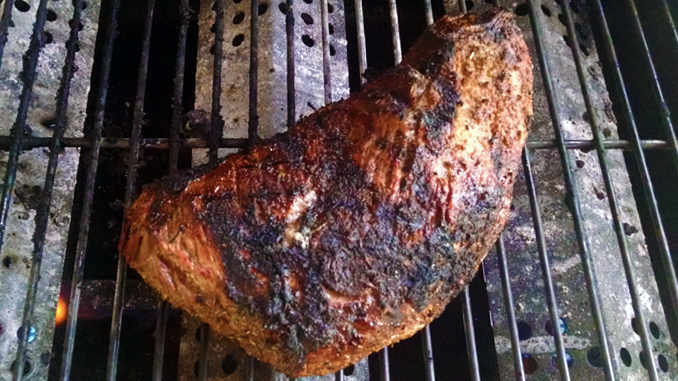 Move the roast to the “Low Heat” portion of your grill. Close the lid and cook until the internal temperature of the roast reaches 130°-140°F. (approximately 20-30 minutes depending on size) Be vigilant, as you don’t want to cook this past medium or it will be chewy and tough.

Let the Roast rest for 10 minutes in a shallow dish or pan. Reserve the drippings*.

Slice thin across the grain of the meat and serve with potatoes, or the traditional Ranch Style Pinto Beans.

Take 2-4 Gold or Red baby potatoes and slice them about 1/4 inch thick.

Lay them across 1/2  of a large sheet of aluminum foil.

Cover the potatoes with a few pats of butter, margarine, or olive oil, salt and pepper.

Fold over the rest of the foil and crimp the sides to make a grilling pouch.

Put the potato pouch on the grill along side of the Tri-Tip Roast during the slow cooking processes.

Serve the grill roasted potatoes with slices of the Tri-Tip for an awesome meal!

*I like to reserve the drippings the collect when resting the meat, and pour it across my roasted potatoes.