For the record, this is not my original recipe.  A person with a bookstore runs across cookbooks, and the more adventurous of us will regularly try some of the recipes therein.  This one originated from Anne McCaffrey, and was first published in Cooking Out of This World, a collection of recipes from science fiction authors that was published by Ballantine Books in 1973.

I believe 45 years is long enough to let a recipe linger in obscurity.  I’ve also modified it as required, because Ms. McCaffrey, while specifying the parsley as an ingredient, neglected to say when to add it.  After trying it in different stages (at the end gives a wonderful bit of freshness, but the herb can overpower the rest of the stew and it’s a touch chewy, at the beginning has other issues) I’ve determined it is best inserted with the potatoes.

First aside: I always go heavy on the parsley, a full 1/2 cup.  Also, if you’re using lamb on the bone, get more than three pounds… closer to four and a half.  The bone will add a great depth of flavor to the broth, but it’s not meat.  By the time you take the meat off the bone, you’ll only have a pound or two of meat and you’ll have an excessively potato-heavy stew. 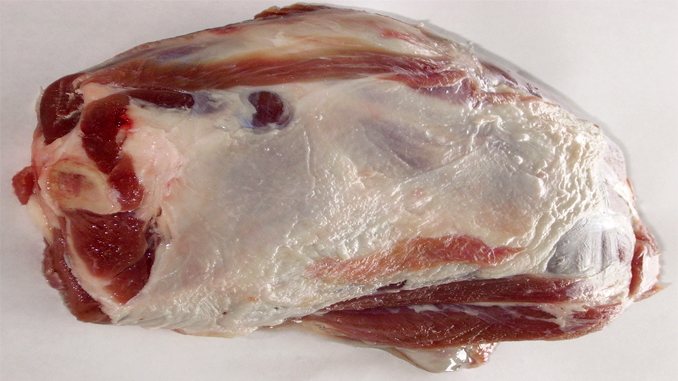 Put the meat in a huge pot (or pressure cooker) and cover it with water.  Add a tablespoon or two of salt (to taste) and several grinds of fresh pepper.  Cook at low pressure for an hour and a half, or simmer for at least three hours.  The meat should be pulling easily from the bone, or will begin to separate when pressed with a fork or wooden spoon.

Second aside: I don’t use the pressure cooker.  Simmering allows me much greater direct control over seeing exactly when the meat is starting to fall off the bone.  This does, however, cause its own problem… the fat.  Even if you have meticulously trimmed the stew lamb (which is unlikely to happen for meat chunks, and is absolutely not going to happen for bone-in cuts) some fat will boil up to the top during the cooking process.  Skim this as it rises.  Then skim it again, because more will come up.  And again.  Keep it going.  Then, once most of the fat is off of the top and you’re left with a light amber color with only the lightest bit of grease on top, grind more pepper and drop it in.  Don’t grind the pepper mill directly over the pot, because the steam from the pot will cause the pepper mill to clog.  Grind a few times onto a sheet of paper or onto a clean palm, and then funnel / drop the pepper in. You have to do this because, while the salt will dissolve into the water, the pepper will be brought up with the fat and it goes away as you skim.  You can just wait to put the pepper in until the end if you’re not using a pressure cooker, but then you lose the early seasoning effect as the water initially soaks into the meat.

If you’ve got stew meat, it should already be in chunks without excessive fat.  You can skip to the next step.  If you’ve got a bone-in portion, remove it from the water with tongs, put it on a cutting board and let it cool down.  Only after it will no longer burn your fingers do you pull / slice the meat from the bone and cleave any remaining thick fat.  Put the meat back in the water.

Bring the water back to a simmer.  Taste, and modify the salt / pepper balance to your preference.  Add the potatoes and the parsley.  Start a twenty-five minute timer.

Third aside: The potatoes will absorb most of the excess fat you have, if you’ve previously skimmed it.

When the timer goes off, add the frozen peas.  Set a five minute timer.

When the five-minute timer goes off, you have a delicious simple stew.  Sure, it took a while… up to four hours, if you had to take the meat off the bone… but it’s stew.  It always takes a while, that’s why you make it in a big pot, so you have plenty of leftovers.

Serve hot, with the bread or biscuits to sop up the broth.

If you didn’t make this for a bunch of people, you’ll have leftovers.  After a night in the refrigerator, check the pot.  Any leftover fat will have drifted to the top and coagulated like a thin sheet of ice over a pond.  Scrape off the hardened fat with a spoon and put the cover back on the container.  It looks better that way, isn’t greasy when it’s reheated, and it’s healthier too.  After all, you need to stick around for a while… to eat more lamb stew.

About AlienMotives 1992 Articles
Ex-Navy Reactor Operator turned bookseller. Father of an amazing girl and husband to an amazing wife. Tired of willful political blindness, but never tired of politics. Hopeful for the future.