On Monday, after President Trump announced his intentions of adding a 6th branch to the already 5 branches of the military called Space Force, he announced yet another wave of tariffs on Chinese imports, coming soon.

“On Friday, I announced plans for tariffs on $50 billion worth of imports from China.”

The original tariff as reported @ The News Blender would be a 25% tariff on 800 exports starting July 6th, 2018, while another 280 exports would have the 25% tariff imposed on those exports, after the public comment period has past. This is in addition to the already in effect tariffs of 25% on steel and 10% on aluminum that apply to not only China, but Canada and the European Union as well.

“However and unfortunately, China has determined that it will raise tariffs on $50 billion worth of United States exports.”

Canada also has announced retaliatory tariffs of their own on U.S. steel, aluminum, and other products starting in July, the announcement made by Minister Chrystia Freeland, via CNBC, says “the retaliatory measure will cover CA$16.6 billion in imports, the products will be subject to tariffs between 10 percent and 25 percent.”

The European Union has also announced plans to retaliate.

Mexican is already retaliating with tariffs of their own on about $3 billion worth of exports on products such as pork, apples, potatoes, bourbon, and different types of cheese.

“This latest action by China clear indicates it’s determination to keep the United States at a permanent and unfair disadvantage, which is reflected in our massive $376 billion trade in balance in goods.”

“If China increases its tariffs yet again, we will meet that action by pursing additional tariffs on another $200 billion of goods.”

He closes the statement by explaining he has an excellent relationship with President Xi, but he adds, “the United States will no longer be taken advantage of on trade by China and other countries in the world.”

On Friday during a surprise interview with Fox & Friends President Trump said, “the trade war was started many years ago and the United States lost…”

.@POTUS: "The trade war was started many years ago by them and the United States lost… We lost $500 billion in trade deficits last year. We can't do that." pic.twitter.com/vv6GFK31JT 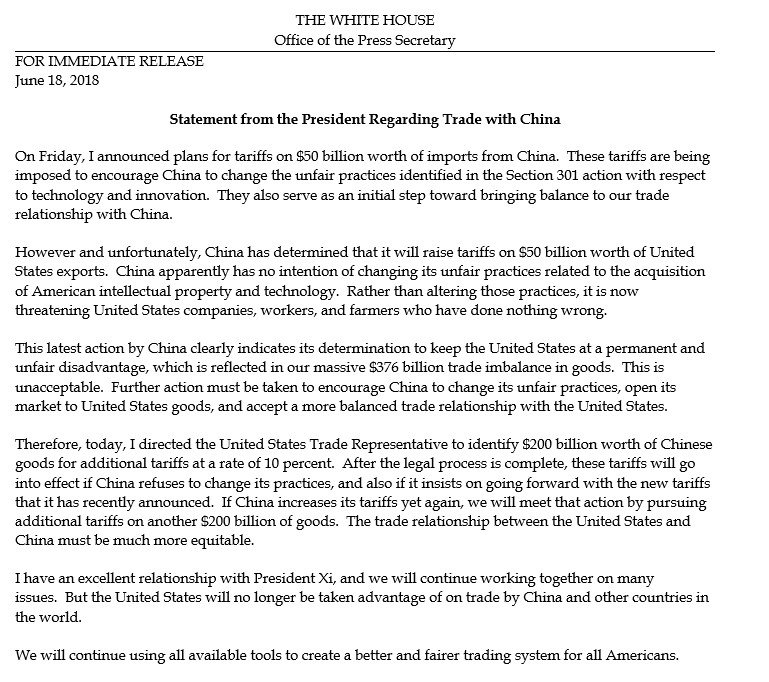 About Tiff 2090 Articles
Member of the Free Press who is politically homeless and a political junkie.