Unlike Art Jones, who told Politico he “snookered,” the republicans running unopposed in the Illinois state primary as both a republican and a Nazi, Fitzgerald’s anti-Semitic statements and views didn’t come to light until just before the June 5th primary, The New York Times reported on Friday, the states republican party in May “rescinded its automatic endorsement,” two months after they had “automatically” endorsed Fitzgerald.

The state’s republican party along with the Republican Jewish Coalition issued a joint statement denouncing Fitzgerald on May 29th, 2018.

In the weeks since he won his primary, coming in second place behind the democrat incumbent Rep. Mark DeSauliner, Fitzgerald has appeared on two podcasts.

The Realist Report host and website owner, John Friend whose website will not be linked to, has a section of quotes “the Jewish race constitutes a united anti-White bloc within White society, and is working for the overthrow of that society by every means at its disposal,” (Father Feeney) Or “The Holocaust is the biggest and most persistent lie in history,” (Ursula Haverbeck).

Fitzgerald spoke with Friend on June 23rd, according to Fitzgerald’s website the two covered many topics, including immigration, State status and more

Then on June 28th he made an appearance on The Andrew Carrington Hitchcock Show. Hitchcock’s website which again will not be linked, is a shrine to Hitler, stating in a list Hitlers virtues, such as “he treated women with respect always.” Or “he wasn’t cruel in the least and murdered nobody.” Fitzgerald and Hitchcock discussed, according to Fitzgerald’s website, “Jewish Supremacy.” 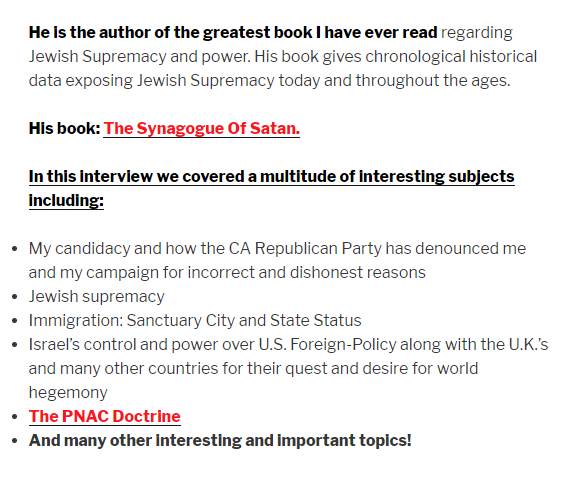 On banning the military’s ability to test chemical and biological weapons on civilian’s without our consent.

His thoughts on “Jewish Supremacy.”

His thoughts on societal unrest and how we need to demand the U.S. stop the “illegal wars,” and we need the FCC to have higher ethical and morals standards in regards to entertainment mediums.

This isn’t the first time Fitzgerald sought a congressional seat, The New York Times article linked above reports that in 2010 and 2012 he ran as a democrat and lost.

Media Matters was the first to report the two podcast appearances.

For What It’s Worth

A list so far of either self-proclaimed neo-Nazi’s or nationalists, that have ran, are attempting to run or are on the ballot in November as republicans

About Tiff 2047 Articles
Member of the Free Press who is politically homeless and a political junkie.