…on Monday assume duties as the acting Administrator of the EPA. I have no doubt that Andy will continue on with our great and lasting EPA agenda. We have made tremendous progress and the future of the EPA is very bright!

Head of the EPA Scott Pruitt resigned on Thursday amid a growing number of ethical scandals and violations.

It was my great honor to join proud, hardworking American Patriots in Montana tonight. I love you – thank you! #MAGA https://t.co/475ct7hW3D

It was President Trump’s ninth campaign style rally in 2018.

Trump is doing a campaign rally in Montana. I'm going to tweet quotes and fact-checks. Please mute this thread if you don't want a lot of rally tweets.

A couple of highlights

He mocked Senator Elizabeth Warren saying “at the debate we’ll toss her a DNA kit.”

President Trump appears to mock Sen. Elizabeth Warren during a rally in Montana, promising to ask her to complete a test for the results of her heritage.

"But we have to do it gently because we're in the MeToo generation." https://t.co/XCOPvwTKIT pic.twitter.com/DLFXeR0doT

Hey, @realDonaldTrump: While you obsess over my genes, your Admin is conducting DNA tests on little kids because you ripped them from their mamas & you are too incompetent to reunite them in time to meet a court order. Maybe you should focus on fixing the lives you're destroying.

A vote for Democrats in November is a vote to let MS-13 run wild in our communities, to let drugs pour into our cities, and to take jobs and benefits away from hardworking Americans. Democrats want anarchy, amnesty and chaos – Republicans want LAW, ORDER and JUSTICE!

Thanks to REPUBLICAN LEADERSHIP, America is WINNING AGAIN – and America is being RESPECTED again all over the world. Because we are finally putting AMERICA FIRST!

President Trump is scheduled to be in Great Britain next week, activists have announced plans to protest the President, London’s mayor, Sadiq Khan, approved a giant balloon to float above Parliament. 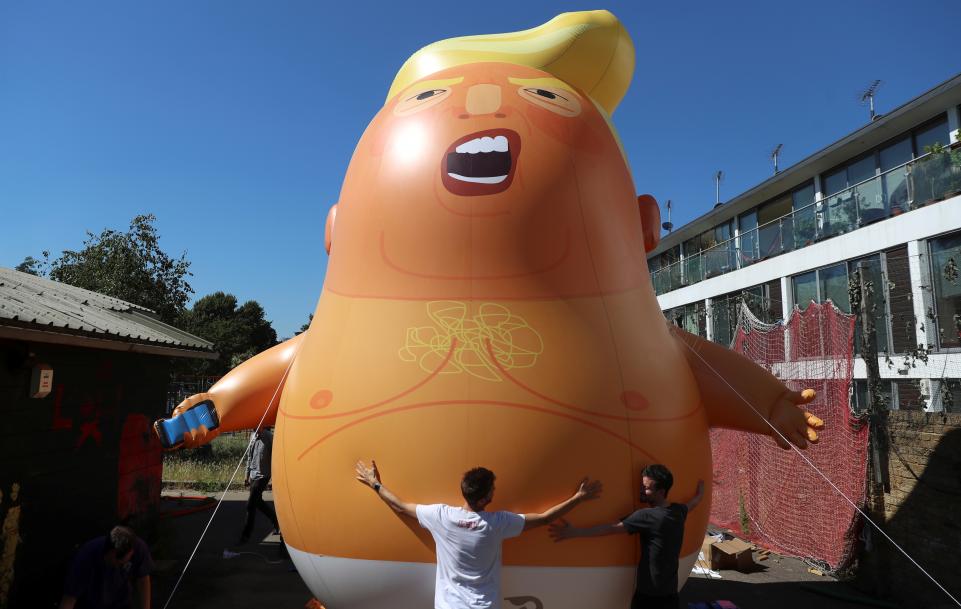 The New York Times reports that protesters still need to get approval from “Metropolitan Police and from the British air traffic control before they can fly the balloon.”

Just won lawsuit filed by the DNC and a bunch of Democrat crazies trying to claim the Trump Campaign (and others), colluded with Russia. They haven’t figured out that this was an excuse for them losing the election!

“Won” =’s case dismissed by D.C. District Court Judge Ellen Huvelle, who ruled that the plaintiffs, Roy Cockrum, Scott Comer, and Eric Schoenberg, failed to prove that D.C. was the right jurisdiction for the lawsuit, “For the reasons stated below, the Court concludes that it lacks personal jurisdiction over defendants and, alternatively, that Washington D.C. is not the proper venue for plaintiffs’ suit. The Court will grant defendants’ motions to dismiss, deny plaintiffs’ motion, and dismiss plaintiffs’ suit without prejudice.”

Cockrum and Schoenberg are DNC donors.

Comer was a DNC employee.

The Hill reports that the lawsuit had no official DNC support.

About Tiff 1369 Articles
Member of the Free Press who is politically homeless and a political junkie.