In honor of San Diego Comic-Con ending… a long-threatened Night Owl on cosplay.

Science fiction conventions have had people dressing up for decades.  The official start of it came in 1939 when then-young fan Forrest J. Ackerman showed up for the big yearly convention in what he termed his “futuristicostume”.  The notion caught on, with a masquerade becoming a yearly tradition.  People would either dress in ways thought appropriate to the genre (such as “steampunk” or “the world of tomorrow”) or as favorite characters.

In 1984, a Japanese reporter visiting Worldcon, the biggest yearly sf convention, dubbed the phenomenon “cosplay”.  The notion took root in Japan, became a mainstay of their conventions, and then migrated back over to the U.S.

The demonstrated popularity among adults in Japan convinced U.S. convention organizers to feature cosplay throughout their conventions rather than simply at one night’s masquerade.  It is most popular by far at comic book and media-based conventions, where fans have visual images to use as basis for the costumes.  At purely literary or gaming conventions, there are typically a small handful of people in costume.

The obvious reason for doing it is the attention.  People like to show off their sewing, makeup and prop-making skills, which otherwise are virtually ignored.  It’s also a chance for some people to show their fandom for a particular character or show.

There’s another reason, slightly more devious, that was discovered about six years ago.  If you want to have a young child in a walker at a convention and don’t want them to be bumped into – cosplay.  Instead of getting bumped into, they’ll have people stopping to take pictures.  Oh, and you also stand a good chance of being moved to the front of the line for registration.

Doing that for a couple of years, however, can create a monster.  But one that’s not afraid to be among crowds and get public attention, which is a potentially good thing so long as they recognize dangers as well.

How can I state this so authoritatively, you ask?  Well… A-Kon.  It’s a yearly anime convention held in Dallas/Fort Worth. 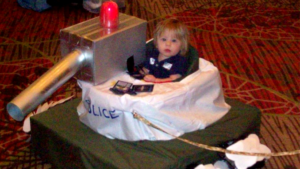 2012… Leona, from Dominion: Tank Police.  People love a baby driving a tank.  They really do.

2013… toddler flashback Lum, from Urusei Yatsura (because I was already concerned that she’d continue this of her own accord, and if she ever wants to dress up as Lum, walking around the convention floor in a tiger-striped bikini, I can tell her, “nope, you already did that costume, you don’t want to repeat yourself.”

The plushies are from a webcomic, Two Lumps, whose creators were there.  They’re cat plushies.  She wanted them desperately… even if the one, Snooch, is in his “drunk” mode. 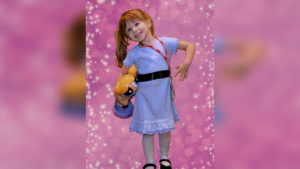 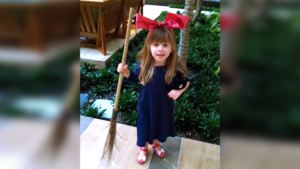 2015… Kiki, from Kiki’s Delivery Service.  Beginning a tradition of running into adults who were cosplaying the same characters. 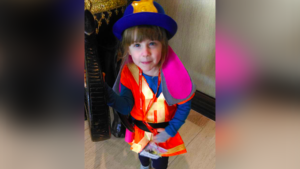 2016… Judy Hopps from Zootopia.  She kept the hat and wore it around town a few times, complete with the giant bunny ears flopping from its sides. 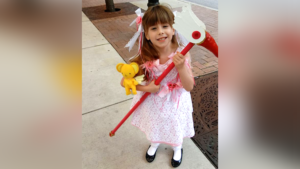 2017… Cardcaptor Sakura.  Warning: no matter how carefully you mold clay, even superglue will not stick to it well.  Shortly after the picture was taken the top of the staff fell off.  Duct tape is everyone’s friend, and helped to calm a distraught daughter.  She went on to have a great time. 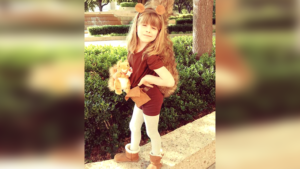 2018… Squirrel Girl.  The first time since 2015 that nobody else was dressed as the same character… which worked very well for the group Marvel photo, which featured a dozen Deadpools, a half-dozen Spider-Mans, multiple Thors, Wolverines, Captain Americas, a couple of Hulks… and one tiny Squirrel Girl who, if push came to shove, would somehow beat them all.

As a bookseller who specializes in genre fiction, I’ve attended dozens of conventions, many of them as a vendor in the dealer’s room.  A-kon isn’t my convention, it’s hers, and the cosplay makes it special.   I strongly recommend it for kids, should they be so inclined, and for adults if they are so inclined… and if they find a costume they believe they can pull off.

Question of the night: Anyone else have pictures to share?

H/T to Lenny for going above and beyond, in helping me with the pictures tonight.

About AlienMotives 1991 Articles
Ex-Navy Reactor Operator turned bookseller. Father of an amazing girl and husband to an amazing wife. Tired of willful political blindness, but never tired of politics. Hopeful for the future.