This morning, the Senate Judiciary Committee released over 2,000 pages of testimony and exhibits regarding the June 9, 2016 Trump Tower meeting. Transcripts from Congressional testimony from those who attended the meeting, include  Donald Trump, Jr., Ike Kaveladze, Anatoli Samachornov, Rinat Akhmetshin, and Rob Goldstone, while Jared Kushner and the Russian lawyer Natalia Veselnitskaya provided written accounts of the meeting to the committee. The transcript of testimony from Fusion GPS founder, Glenn Simpson, was also released.

Donald Trump Jr, testified in front of the committee on September 7, 2017, and while his account at the time largely lines up with the account which had been released to the public via his statement on July 8, 2017 about the meeting, much of his account remains questionable.

We now know that his father, Donald Trump, wrote the misleading statement himself and since Trump Jr’s testimony last September, the Russian lawyer who attended the meeting has admitted that she is an informant to the current Prosecutor General of Russia, Yuri Chaika, and has close ties to the Kremlin. Her admission  contradicts her previous written testimony to the Judiciary Committee.

There are 224 pages of testimony from the President’s son alone, the person who was first contact for the Russians who asked for the meeting and was responsible for scheduling it and for inviting his brother-in-law Jared Kushner and Donald Trump’s campaign manager, Paul Manafort, to attend. There doesn’t seem to be a great deal of new information that isn’t already know to the public, but there are some interesting facts to be gleaned from the many pages of testimony.

A few highlights from the testimony:

Donnie Jr was very interested in getting dirt on Hillary Clinton, his father’s political rival. He told Rob Goldstone, “I love it”, when told via email that  his source could provide “official documents and information that would incriminate Hillary and her dealings with Russia” and said the information came from Russia’s crown prosecutor.

The Washington Post points out that the fact Donald Trump, Jr. was enthusiastic about the possibility of receiving dirt on his father’s political opponent from the Russians is key.

This is key because Trump Jr. wasn’t completely clear about what he was talking about in the email. It suggests that he was eager to have the meeting specifically because of the opposition research that was supposedly being supplied by official sources in the Russian government. His initial explanation of the meeting suggested that it was primarily about adoptions, although that explanation quickly fell apart.

Other witnesses also suggested Trump Jr. was eager to get dirt. Russian lobbyist Rinat Akhmetshin told senators Trump Jr. started the meeting by saying something like, “So you have some information for us?” Ike Kaveladze, an American-based employee of a Russian real estate company and who was at the meeting, said Trump Jr. asked “if they got anything on Hillary.”

On page 46, Donnie Jr. states that he was told by Veselnitskaya that Hillary was attempting to avoid paying in taxes in the U.S. and in Russia. 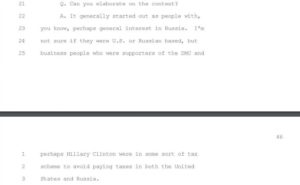 In the lead up to the June 9 meeting, Donald Trump Jr. received and made several calls. One call he made was to a blocked number and he denies knowing who that call was to. Corey Lewandowski testified to the House Intelligence Committee that the Trump Tower residence uses a blocked number, per the Democratic Minority report.

The timeline of those calls are laid out by Philip Bump:

On page 27 of the testimony, Donald Trump, Jr. denies any knowledge of who the call at 4:27 was from.

Lying about meeting with Russians

On page 55 of Donald Jr.’s testimony, he is asked about a statement he made in an interview with the Times where he denied participating in any campaign-related meeting with any Russian nationals.

Q . “Asked at that time whether he had ever discussed government policies related to Russia, the younger Mr. Trump replied ‘A hundred percent no.'” Did the Times accurately quote your March statement to them?

A. I do not know. I imagine I was talking about Russian government people, not Russian nationals because I would have no way of knowing how many people of Russian descent that I would have met along the campaign trail every day for two years.

Q. So how do you square this account with what we now know about the June 9th meeting?

A. I think it’s accurate when I’m talking about Russian officials. Again, I don’t know how I would know if I met any Russian nationals along the way. So I think that would be the discrepancy.

Offered a meeting with Putin

On page 30, Donald Trump Jr. is questioned about an email invitation extended to his father in July 2015 to a November birthday party for Aras Agalarov in Moscow. When the invitation was turned down, citing the presidential campaign as preventing Donald Trump’s attendance, Goldstone replied, “I totally understand re Moscow, unless maybe he would welcome a meeting with President Putin which Emin would set up .”

Testimony in front of a Congressional Committee, while not under oath, is compelled by law to be truthful. The facts of the Trump Tower meeting deserve to be known in their entirety and there are portions of Donald Jr.’s testimony that are questionable at best. The fact that they lied about the meeting is an obvious problem. The Trump team’s response to an offer of Russian assistance should have automatically been to call authorities. Instead, they happily met with Russians who had offered help in damaging their opponent.

The cover up is always a problem. We know that Special Counsel Mueller is looking at the Trump campaign for obstruction of justice. The truth will come out, sooner or later. And the public deserves answers to what exactly happened in that meeting.

There is a great deal of information to be gleaned from these transcripts and I highly recommend that you read as much of them as you can.