When you have people snipping at your heels during a negotiation, it will only take longer to make a deal, and the deal will never be as good as it could have been with unity. Negotiations are going really well, be cool. The end result will be worth it!

“Negotiations are going really well, be cool,” he says. And if you don’t believe it, he absolutely proved it with the announcement from the Rose Garden yesterday about the really great, awesome deal he made with the EU…right? Oh, make no mistake, his supporters are crowing all about it, claiming victory over all of the NeverTrump and other conservative, free-market naysayers. Trump was right all along about tariffs and all of the unfair trade issues and the awful, terrible, trade deficits! In your face, losers!

AlienMotives did a great job in explaining what really happened with the grand Trump/EU trade deal in an earlier piece here on TheNewsBlender (“Trump Surrenders, Declares Victory”). He covered it so well that I don’t have much to add to it, other than one point about the free market. That is, one of the biggest “wins” that Trump and his supporters are hailing is that the EU has promised to buy more of our soybeans. First, a vague “promise” without a precise, written declaration of not only the commitment, but also the specific details of the commitment, is nothing more than words. Hype. Classic Trump. He claims this increase in soybean purchases will be “a lot” and will begin “immediately”. Where have I heard something will begin immediately before from Trump? (Hint: NK)

In any case, even if the agreement to buy more soybeans was official and a written contract, how exactly does that demonstrate free market principles? How can a government entity promise to purchase “a lot more” of something like that? That’s not the free market at work. The free market would allow current demand and competition determine the purchases, not some pre-arranged deal to “buy more”. Is the EU going to force all of the consumers in the EU to purchase their soybeans from us? What if another country offers a better deal? Are we free to price the soybeans as high as we want because the EU has committed to buying them from us in any case? Sorry, but the free market does not work that way and for someone to tout that we have secured an agreement (as spurious as it is) for the EU to commit to buying more of something, that is nothing more than manipulating the free market, not promoting it…and that will have various unintended consequences as manipulation and interference of the free market always does.

Tariffs are the greatest! Either a country which has treated the United States unfairly on Trade negotiates a fair deal, or it gets hit with Tariffs. It’s as simple as that – and everybody’s talking! Remember, we are the “piggy bank” that’s being robbed. All will be Great!

So let’s take a look at a few specific cases to get a better view of how “tariffs are the greatest!”:

We’ll start with Whirlpool…an American company, Whirlpool is the world’s largest home appliance manufacturer. So, naturally a company like that needs help from the government, right? Enter Trump. One of the first tariffs he implemented was on washing machines at the behest and cheering from Whirlpool. Sure, Whirlpool loved the idea of tariffs when they were the big beneficiary of them (if foreign imported washing machines are more costly due to tariffs, then Whirlpool will sell more of their machines). And the Trump supporters cheered. Genius at work. That is, oops, until Trump went further with his tariffs and placed them on steel and aluminum, which is, of course, what makes up the bulk of Whirlpool’s washing machines and other home appliances. Now, Whirlpool is bemoaning their worst day in over 30 years (CNBC):

Shares of Whirlpool, the U.S. based washing machine giant who was once in favor of stricter trade controls for its own industry, posted their worst day in over 30 years after executives blamed rising steel and aluminum costs for diminished quarterly earnings.

“Global steel cost has risen substantially and, particularly in the US, they have reached unexplainable levels,” Whirlpool CEO Marc Bitzer told shareholders during a conference call Tuesday.

Next, let’s move to motorcycles. There’s nothing more American than a Harley-Davidson Motorcycle! Harley-Davidson, out of Milwaukee, WI has been caught up in Trump’s trade war and is estimating that it is due to lose $150 million through 2019, specifically due to the tariffs that the EU has placed on their products in retaliation to Trump’s tariffs. Harley-Davidson explains (USA Today):

“We are doing everything we can as a company to absorb the costs,” Chief Financial Officer John Olin said during a conference call with analysts. “But we can’t eat the whole $45 million to $55 million,” so the company has lowered its motorcycle-segment profit margin this year to reflect the tariffs.

In response, and an attempt to weather the storm, Harley-Davidson has announced that they will move some of their production of products destined for the EU overseas in order to avoid the tariffs. If they want to survive, they really have no choice. Upon their announcement, President Trump used the bully pulpit to attack Harley-Davidson, attempting to inflict further damage:

Harley-Davidson should stay 100% in America, with the people that got you your success. I’ve done so much for you, and then this. Other companies are coming back where they belong! We won’t forget, and neither will your customers or your now very HAPPY competitors!

Rational people understand Harley-Davidson’s dilemma…it’s hard to “be cool” when the most powerful man on the planet is causing you to lose $150 million and then publicly attacks you when you try to alleviate it.

One more…farmers. As Trump would have us believe, our farmers are taking a beating from unfair trade throughout the world and have been for years. However, as with most details about issues, Trump is simply wrong. “American farmers enjoy a trade surplus. Trump could wipe it out” (CNN):

The US agriculture industry has long exported far more products than the nation has imported. Selling crops, nuts, meat and other goods abroad are vital part of the sector, with more than 20% of agricultural production sent abroad. That has led to a trade surplus, which totaled $20.3 billion in fiscal 2017 and is projected to grow to $22.5 billion in this fiscal year, according to the US Department of Agriculture.

It’s obvious that Trump’s tariffs are doing great harm to farmers, yet he is now claiming victory for them. More from the CNN article:

The United States is actually the world’s top exporter of food and agricultural products, according to the Department of Agriculture. Some 70% of cotton and tree nuts grown here are sold to other countries, as are 50% of the wheat, rice and soybeans. Beef and pork are also among the nation’s largest exports.

Once US farmers bow out of a market, other countries rush in. Already, Brazil is boosting its soybean exports to China. And once new trade partnerships are established, it may be tough for American farmers to return, said Steven Kyle, an agricultural economist at Cornell University’s Dyson School of Applied Economics and Management.

Trump is endangering all of that.

But here’s the worst part. Of course his strongest supporters are going to cheer him on, but now we have many of his “reluctant supporters” that are falling for all of this as well. It hasn’t been that long since Republicans were roundly accusing voters on the left for being ignorant, “low information voters”. Now, Republicans are challenging the left for that title more and more as we delve further into Trumpism. Consider this recent poll from Pew Research: 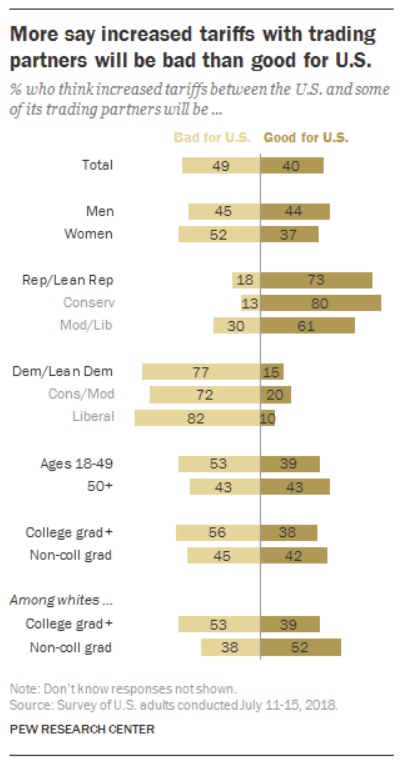 Can that really be right? Seventy-three percent of Republicans now believe that Trump’s tariffs will be good for the U.S.? This is very troubling news. It demonstrates just how ignorant and gullible the right is…which explains how we ended up with President Trump. Of course, Trump has the help of his Trump Propaganda Minions (TPM) in Rush and Hannity to help BS them. Levin, to his credit, has been pretty solid and consistent on the foolishness of the tariffs…hopefully, that will continue.

For what it’s worth, the Democrats polled just the opposite (77% believe the tariffs will be bad for the U.S.), but I don’t believe that’s because they are more knowledgeable about economics (*cough cough* Bernie *cough cough*) but rather just being against anything Trump does.

1. Economics in One Lesson by Henry Hazlitt
2. Basic Economics by Thomas Sowell
3. Free to Choose by Milton Friedman

Be cool. I wonder if that’s what he told all of his investors and creditors for all of his bankrupt businesses.