The News Blender — Late July found the President tweeting about an old, yet, somehow new theory that Twitter was “shadow banning,” conservatives. The whole compliant was that certain accounts wouldn’t generate in the search box or appear in followers timelines.

A search bar is just that a bar you can search twitter for other users, information, or hashtags for example.

When searching @D this is what pops up. 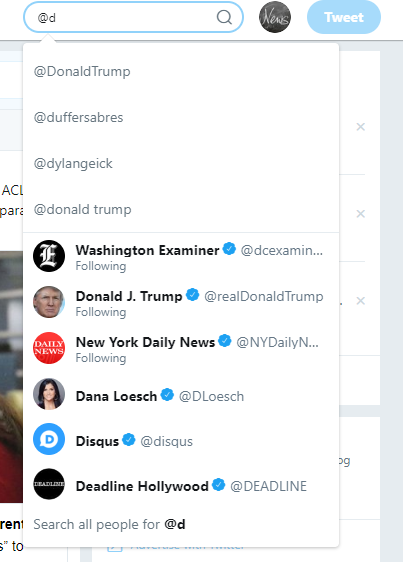 This is my account which means the names I see, will be different than other users, because the names that appear in the “search box” are for accounts that the user, that’s me, visits most often. As you can see from the image, @realDonaldTrump is visited regularly.

In response to the President’s tweet, Twitter once again addressed the issue of “shadowbanning,” in a statement they said we do not “shadowban,” that they were aware of the issue, sent a fix to address the issue. They also added in their statement, “To be clear, our behavioral ranking doesn’t make judgments based on political views or the substance of Tweets.”

On Wednesday the CEO of Twitter @Jack aka Jack Dorsey appeared on the Fox News Radio show “Benson and Harf.” During his appearance, the full transcript and audio is available at Fox News he once again addressed the issue of purposefully “shadowbanning,” people on the right.

In response to Benson asking about shadowbanning Dorsey once again explained it’s about user behavior, what is the user searching for, is it, mostly news, weather, sports…the list is endless, the “algorithm,” used as Dorsey explained is, “We started ranking based on what our algorithm believe that you will find interesting that you will find matter. It’s based on who you follow. It’s based on who you engage with. It’s not based on decisions that we make.” Doresy also explained that users can turn the ranking system off, “We have an escape patch here, which is you can turn that whole ranking off. You go into settings and you turn off the ranking of the timeline.”

On Thursday Axios reported that Rep Kevin McCarthy (R-CA) issued a letter, to Energy and Commerce chairman Rep Greg Walden (R-OR) requesting that Twitter CEO Jack Dorsey testify before the committee in the fall “so that the American people can learn more about the filtering and censorship practices on his platform,” McCarthy wrote in the letter.

McCarthy has concerns that “shadowbanning,” is effecting conservatives more than other voices on Twitter, he writes, “I am especially concerned by revelations that some social media companies are filtering the information that their users can see. These filtering and censorship practices have targeted conservatives disproportionately.”

McCarthy also writes, “Any solution to this problem must start with accountability from companies like Twitter, whose platforms have enormous potential to impact the national conversation and unfortunately, enormous potential for abuse.”

Axios explains that Twitter CEO Jack Dorsey is expected to testify to the Senate Intelligence Committee in September in regards to “disinformation and elections.”

As a reminder, Rep Kevin McCarthy is the front runner to replace retiring Speaker of the House Paul Ryan (R-WI) if the republicans keep the majority in the House after mid-terms.

For What It’s Worth

A few years ago, Facebook and Twitter, in response to user feedback switched how our timelines appear, this feedback consisted of users complaining that they did not what to scroll passed “I went to the bathroom,” five minutes later, “I am done using the bathroom,” posts to find posts they cared about. Based on this both companies set to make the user see what they viewed as more popular than the status updates every five minutes about nothing more than daily life stuff. This information can be found at many media outlets, as it was reported at the time, considering after the change, users still complained.

Why This Matters (opinion)

Twitter is a private company they have the right to refuse service, just as a baker has the right to not be forced to bake a cake. Free Market works, if a company is not providing you a service you like, or is in fact, hindering your ability to speak out against something, pick a different service, others do existence, Twitter, Facebook, Snapchat, Instagram, are not rights, they are free social media platforms, that you have the right not to join, promote or use.

Authors Note: Kevin McCarthy is my rep, I have voted for him several times. I did not vote for him in 2016.

About Tiff 2048 Articles
Member of the Free Press who is politically homeless and a political junkie.

?"I wish I were a https://t.co/d8RcqnFtyD blog. That is what I truly wish to be. Cause if I were a @TheNewsBlender blog... everyone would be in love with me!"? pic.twitter.com/wNoUqvw1LP