Congratulations to @GreggJarrett on The TREMENDOUS success of his just out book, “The Russia Hoax, The Illicit Scheme To Clear Hillary Clinton & Frame Donald Trump.” Already number one on Amazon. Hard work from a brilliant guy. It’s the Real Story of the Rigged Witch Hunt!

“Already number one on Amazon.” Unless it dropped 53 spots in nine hours, this is just simply a lie from Trump. Surprise! What’s more, I thought Amazon/Washington Post was completing untrustworthy?

The closest to number one would be in the category “History” (I know, right? LOL), but even then it’s behind the likes of Neil deGrassse Tyson, so that tells us what to make of that: 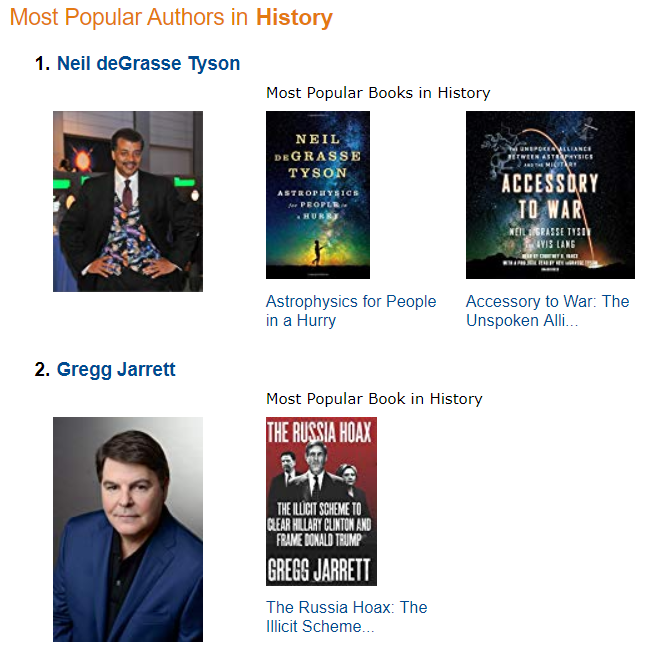 Full disclosure: I’m not going to read this book. That can legitimately open up the criticism that I’m judging something without even reading it. I will concede to that. That said, we all know damn well that Trump did not read this book either, so I feel just as qualified in reviewing it without reading it.

Here is part of the description of the book, as listed on Amazon:

The book will examine:

With insightful analysis and a fact-filled narrative, The Russia Hoax delves deeply into Democrat wrongdoing.

We can plainly see that every one of these points has been exhaustively followed, discussed, and covered by all of us over the past couple of years. This is nothing more than a consolidation of all of the speculative, conspiracy-laden, Trump narrative talking points that we’ve all been debating ad nauseam.

An endorsement from Rush Limbaugh:

“If you want in one hand the entire compendium of the effort to overturn the election results of 2016 from the Steele dossier to the corruption of the deep state to the exoneration of Hillary Clinton to the Mueller investigation, if you want to have in your hand every detail, every explanation, get this book. From the front cover to the back of the book it is chock-full with evidence, explanations, the history of what happened, the timeline. And it’s written in a very enjoyable-to-read way.” (Rush Limbaugh)

And an excerpt from the back cover of the book:

As The Russia Hoax details, there was never any plausible evidence that Trump or his campaign collaborated with Russia to win the presidency. The FBI had no legal basis to initiate its investigation. Facts were invented or exaggerated. Laws were perverted or ignored. The law enforcers became lawbreakers; James Comey’s scheme to trigger the appointment of his friend as special counsel was a devious maneuver by an unscrupulous man. His insinuation that the president obstructed justice was another canard designed to inflame the liberal media. Sure enough, they became witting accessories.

It may take months, if not years, before a true accounting is divulged. This is how cover-ups work—the truth is slow to emerge. However, we know enough about the misdeeds and conflicts of interest by people like Robert Mueller, Peter Strzok, Lisa Page, Andrew McCabe, and others to know that real crimes by career officials have piled up. Until history—or a special prosecutor—brings these officials down, the story told here presents more than sufficient facts for the reader to reach the inexorable conclusion that the investigation of President Trump is the witch hunt he’s called it.

With insightful analysis and a fact-filled narrative, The Russia Hoax builds a step-by-step case that even the most partisan Democrat will find nearly impossible to dispute.

I’m not going to go through each point again here, as it is not the purpose of this editorial.

So, what is the purpose of this editorial?

Basically, it’s simply to point out what we are up against. The Trump/FoxNews propaganda machine is very real. It’s not enough that all of these FoxNews personalities are on TV day in and day out regurgitating all of these talking points over and over. The trick is to also write books that they can then come back on and talk about over and over. The books are meant to do two things. First, to make money on all of the rubes who buy such tripe. But second, and more nefarious, is to give it the perception of credibility. If they write a book about it (and it rises to the tops of the bestseller lists), they really must know what they’re talking about, right? It’s no accident that everyone on FoxNews are writing books. Of course, they all get immediate exposure on FoxNews in order to push them up the bestseller lists (along with the use of the bully pulpit), so it’s quite a racket!

Anyway, I thought this might be a fun topic of discussion. What do you think about the book-writing scheme of these media outlets like FoxNews? Or pick one of the bullet points from the list above that the book “examines” and give your thoughts on it.