On the one year anniversary of Robert Mueller’s appointment as special counsel in the investigation into Russian meddling in the 2016 election and Trump campaign involvement, President Trump took to Twitter to opine about what he has often referred to as a “Witch Hunt”.

Congratulations America, we are now into the second year of the greatest Witch Hunt in American History…and there is still No Collusion and No Obstruction. The only Collusion was that done by Democrats who were unable to win an Election despite the spending of far more money!

Donald Trump is not the first political figure to lament about the perceived unfairness of an investigation. Richard Nixon referred to the Watergate investigation as a witch hunt before he resigned and the Democrats complained vigorously about Ken Starr’s investigation that led to Bill Clinton being impeached. Hillary Clinton famously referred to it as a “vast right-wing conspiracy”. 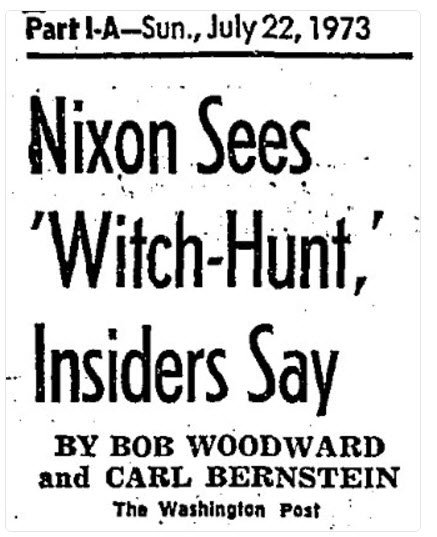 CNN analyzed the “witch hunts” that have plagued recent presidents and it turns out that Donald Trump has a long way to go before his witch hunt compares to previous witch hunts, both in the length of time of investigation and in the broadening of the scope of the investigation. For the investigations which are complete, the National Archives provides another measure: how much space the records take up in cubic feet. (A handy graphic is available in CNN’s article.)

The “Watergate Special Prosecution Force” lasted 6 years, 1971 – 1977. Archibald Cox began his work in 1973, shortly after Nixon began his second term. Nixon fired Cox in the famous Saturday Night Massacre but the investigation did not stop, even after Nixon was forced to resign. The Watergate investigation did not wrap up until 1977, having started out as a 5 men burglarizing the DNC offices and ending up with 22 men from the highest levels of government going to jail and the President of the United States resigning in disgrace. Watergate, a scandal that rocked the nation and forced a president to resign, takes up a mere 1,362 cubic ft in the National Archives.

The Iran-Contra Affair investigation spanned 7 years, 1986 – 1993. 14 administration officials were indicted, 11 convicted. Those whose convictions were not vacated on appeal were pardoned by President George H. W. Bush, the investigation not winding down until after the pardons in the last days of the Bush presidency. The National Archives record of the documents of the investigation tallies up to 1,948 cubic ft, significantly more than Watergate. Iran-Contra special prosecutor, Lawrence Walsh, found that there was no evidence that President Reagan had broken the law but had “knowingly participated or acquiesced to” covering up the scandal and issued his final report on January 19, 1994.

Ironically, the very next day on January 20, 1994, Janet Reno announced the appointment of Robert Fiske to what would eventually become the Whitewater investigation.

The Whitewater investigation spans a decade, 1994 – 2004, with reports being issued long after Clinton had been impeached by the House and finally left office in 2001 after serving two full terms as president. Ken Starr started the investigation looking into the Clintons’ investments and ended up exposing a salacious affair with an 22 year old intern. After all was said and done, 15 people were convicted on various charges, Bill Clinton was impeached for committing perjury but not removed from office, and no criminal wrong doing was found in the actions of Bill or Hillary Clinton in regards to their Whitewater investment. The Whitewater records take up a whopping 3,149 cubic ft in the National Archives.

In contrast, the investigation into Donald Trump’s possible involvement into Russian meddling into the 2016 election has just lasted one year so far, although, the end is likely nowhere in sight. Mueller, in one year, has netted 5 guilty pleas, 3 from individuals from Trump’s presidential campaign (Mike Flynn, Rick Gates, and George Papadopoulos), and a total of 19 indictments.  Alex van der Zwaan has the distinction of being the first person indicted in the Russia investigation to do jail time: he is currently serving his 30 day sentence for lying to the FBI.

Paul Manafort, former campaign manager for Trump’s campaign, faces trials in Virgina, starting on July 10, and in D.C., scheduled in September. Numerous individuals associated with President Trump’s campaign have concerning ties with Russia, including Carter Page who was already under investigation by the FBI before he ever joined the campaign. If it is a “witch hunt”, it appears that the witches are real.

Time will tell if the Russia investigation ends up looking like Iran-Contra, Whitewater/Lewinsky, Watergate or a combination of all three.

Presidents should be held accountable for their conduct, regardless of party.