For our first article, on the anniversary of the launching of the Russia probe, we turn to the man leading that investigation: Special Counsel Robert Mueller. 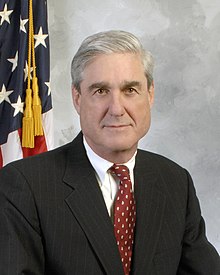 Robert Swan Mueller (pronounced Mull-er) was appointed on May 17, 2017 as Special Counsel for the Department of Justice and tasked with investigating Russian interference in the 2016 presidential election and any connections between the Trump campaign and the Russian government.

Born in 1944 in Philadelphia, he is a Presbyterian and a conservative Republican who was appointed by George W. Bush as Director of the FBI one week before 9/11. He served from 2001 to 2013, the longest serving FBI director since J. Edgar Hoover.

At Princeton University, known as a natural student and athlete, he studied politics and played lacrosse.

When his friend and lacrosse teammate, David Hackett, enlisted in the Marines and was killed in Vietnam, Robert Mueller followed him into service. Years later, FBI Director Mueller would share the impact slain his friend had on his life in a speech to the FBI.

Bob Mueller was an anomaly – coming from wealth and an Ivy League education, he enlisted and served for 5 years. As platoon commander for H Company, 2nd Battalion, 4th Marine Regiment, 3rd Marine Division he earned the respect of his men in a “nomadic” unit that was constantly on patrol. After less than month in Vietnam, Lieutenant Mueller led Hotel Company to the side of nearby Fox Company and into fierce fighting that left 13 Americans dead and 31 wounded.

David Harris, a Marine under Mueller’s command, told Wired that Mueller “probably saved our hide”. Corporal Moranto remembers Mueller’s leadership: “The minute the shit hit the fan, he was there. He performed remarkably. After that night, there were a lot of guys who would’ve walked through walls for him.”

The experience was formative for Mueller, as Garrett Graff reports in the Wired article about Mueller’s combat experience.

Decades later, Mueller would tell me that nothing he ever confronted in his career was as challenging as leading men in combat and watching them be cut down. “You see a lot, and every day after is a blessing,” he told me in 2008. The memory of Mutter’s Ridge put everything, even terror investigations and showdowns with the Bush White House, into perspective. “A lot is going to come your way, but it’s not going to be the same intensity.”

In April 1969, Hotel Company overran an enemy gun position. In the gunfire, Mueller was shot through the thigh with an AK-47 and kept fighting. He spent a month recovering and returned to active duty in May, soon rotating out of command. He was awarded the Bronze Star (with valor), Purple Heart Medal, Navy Commendation Medal(2) (with valor), Combat Action Ribbon, and the South Vietnam Gallantry Cross.

After Vietnam, Mueller went on to law school at the University of Virginia. Before becoming FBI Director and eventually the Special Counsel investigating the President of the United States, Robert Mueller was U.S. Assistant Attorney General and was involved in some notable cases: the Lockerbie bombing Pan Am Flight 103 case and the prosecution of Manuel Noriega. He also oversaw the prosecution John Gotti, after secretively rolling Gotti’s subordinate Sammy The Bull Gravano.

The same tight-lipped secrecy that served Robert Mueller well in bringing John Gotti to justice has been applied to the Russia probe. For the past year as Special Counsel, Mueller has not spoken publicly a single time about the investigation.

In the face of that silence, we are left with his sometimes surprising legal moves and a few other insights into the man making them. Graff, in the Wired article about Robert Mueller’s time in Vietnam, reports two conversations that reveal Mueller’s core beliefs shaped by two of his three families. (In a commencement address he refers to his three families: his family, the Marines, and the FBI.)

The first conversation recalls his upbringing.

His father was a DuPont executive who had captained a Navy submarine-chaser in World War II; he expected his children to abide by a strict moral code. “A lie was the worst sin,” Mueller says. “The one thing you didn’t do was to give anything less than the truth to my mother and father.”

The second conversation points out the importance of discipline.

The Marines and Vietnam instilled in Mueller a sense of discipline and a relentlessness that have driven him ever since. He once told me that one of the things the Marines taught him was to make his bed every day. I’d written a book about his time at the FBI and was by then familiar with his severe, straitlaced demeanor, so I laughed at the time and said, “That’s the least surprising thing I’ve ever learned about you.” But Mueller persisted: It was an important small daily gesture exemplifying follow-through and execution. “Once you think about it—do it,” he told me. “I’ve always made my bed and I’ve always shaved, even in Vietnam in the jungle. You’ve put money in the bank in terms of discipline.”

Robert Mueller has faced death in the jungle of Vietnam, overseen public corruption cases, prosecuted terrorists, and is now at the helm of one of the most significant and complex investigations in American history. When the partisan goggles are removed, we clearly see Mueller as an accomplished, ruthless, driven prosecutor and a war hero who earned the respect of the men who served under him. Whatever happens in the Russia Investigation, Robert Mueller’s role in it will be significant.

HOW SCARED SHOULD TRUMP BE OF MUELLER? ASK JOHN GOTTI OR SAMMY “THE BULL”

"What's this stuff? Some Blog. Supposed to be good for you. I'm not gonna try it... Let's get Mikey. Yea he won't read it. He hates everything! He likes it! Hey Mikey!"https://t.co/d8RcqnFtyD Nutritious. Delicious! pic.twitter.com/93QCqyGLUg