Why is it that the Wall Street Journal, though well meaning, never mentions the unfairness of the Tariffs routinely charged against the U.S. by other countries, or the many Billions of Dollars that the Tariffs we are now charging are, and will be, pouring into U.S. coffers?

NAFTA: Tariffs were eliminated progressively and all duties and quantitative restrictions, with the exception of those on a limited number of agricultural products traded with Canada, were eliminated by 2008. Information found at USTR.gov (Office of the United States Trade Representative.)

When you’re almost 800 Billion Dollars a year down on Trade, you can’t lose a Trade War! The U.S. has been ripped off by other countries for years on Trade, time to get smart!

According to Politico “The Bush tariffs were costly to consumers, too. A January 2003 study by the Peterson Institute for International Economics estimated that the steel tariffs may have temporarily increased steel industry employment by around 3,500 workers — but at a cost to consumers of around $400,000 per job.”

Jesse Watters “The only thing Trump obstructed was Hillary getting to the White House.” So true!

As only one of two people left who could become President, why wouldn’t the FBI or Department of “Justice” have told me that they were secretly investigating Paul Manafort (on charges that were 10 years old and had been previously dropped) during my campaign? Should have told me!

Candidates for President 2016 on ballots for 20 plus States

Candidates for President 2016 on ballots for less than 20 States

….Paul Manafort came into the campaign very late and was with us for a short period of time (he represented Ronald Reagan, Bob Dole & many others over the years), but we should have been told that Comey and the boys were doing a number on him, and he wouldn’t have been hired!

.@newtgingrich: "Nobody should underestimate how much Paul Manafort did to really help get this [Trump] campaign to where it is right now."

Mark Penn “Why are there people from the Clinton Foundation on the Mueller Staff? Why is there an Independent Counsel? To go after people and their families for unrelated offenses…Constitution was set up to prevent this…Stormtrooper tactics almost.” A disgrace!

Politico reported in June of 2015 the racketeering lawsuit was brought by Larry Klayman of Freedom Watch. The case centered around FOIA requests made by Klayman. 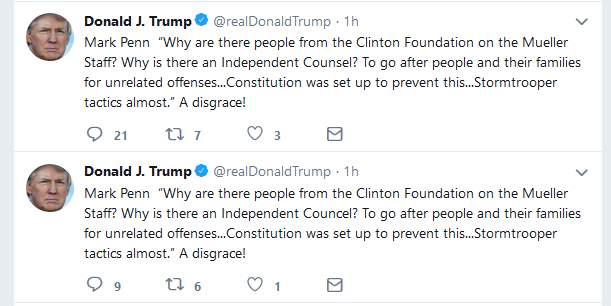 He once again misspelled the word counsel and deleted the tweet.