The simple answer is, yes, voter fraud is real. The Heritage Foundation tracks very real proven cases and actual criminal convictions of voter fraud. So there is no question that it happens.

The important question is whether it happens enough to have any impact on the results of any elections. The answer to that is much more complicated.

As was discussed in an earlier News Blender post, Matthew Dunlap, a former member of President Trump’s Presidential Advisory Commission on Election Integrity that was established in May of 2017, has claimed that documents just made available to him (through a lawsuit he had to file) from other members of the Commission make clear that “they do not contain evidence of widespread voter fraud.” He added, “that some documentation seemed to indicate that the commission was predicting it would find evidence of fraud.”

The commission was disbanded in January of 2018 due to a number of legal challenges and under the claim by the Trump administration that individual States were not cooperating in providing requested data and access to voter information (voting is a State function and the Federal Government has no authority to interfere except under certain circumstances).

In the end, the commission was not able to find evidence of widespread voter fraud as claimed by President Trump. Dunlap, whom I should mention was one of the Democrats on the commission, has now been going to great lengths to criticize the whole idea and that the Republican members of the board were intent on proving Trump right, rather than objectively investigating the facts.

He’s almost certainly right in that.

However, that does not mean that voter fraud does not exist and it’s not potentially a very big problem. Being in Wisconsin, we have been vigorously debating the voter ID requirement for many years. We’ve passed a law requiring it, only for it to be delayed by court injunctions, and after many “on again”, “off again” court proceedings, it has now been successfully implemented.

Many critics of photo ID laws claim that the voter suppression aspect of them effectively handed the Wisconsin vote for President to Trump. That has been disputed by numerous reports including from left-leaning outlets like the Washington Post and PolitiFact.com.

Ok, get to your point, Steve…

I believe that there is voter fraud happening out there in a number of ways. To what extent, I have no idea, but I’m confident it’s not as pervasive as the President claims. However, in today’s divided environment where many elections are decided on the narrowest of margins, it does not take much to make an impact on things.

The argument against photo ID’s for voting is that there is not a problem with this type of voter fraud to begin with, as we don’t have examples of it to show. My question is, how would we have examples to show if we don’t even check for this? If we don’t ask for ID, how do we know that people are not doing it?

But even assuming that it doesn’t happen much, simply allowing for the potential of it has a very negative impact on the electorate by sowing distrust in the results. When a large percentage of the electorate does not trust the legitimacy of elections, we have a big problem. It would be one thing if there really were no open vulnerabilities to be concerned about, but there are.

Let me provide a scenario of what I’m talking about:

Let’s say that no ID is needed to verify who you are as a voter when you cast your ballot. As long as I am registered, I can walk into my polling place, tell them I am “Steve Wood” at such and such address, they will look in their voter registration rolls, see that I am listed and hand me a ballot. I vote and walk out.

How do they know I am “Steve Wood”? They don’t…they take my word for it.

That’s a vulnerability. That’s a hole in the system.

So how would a nefarious person/group take advantage of this in order to make a difference in an election?

Well, in Wisconsin (and probably most other States), anyone can access a public website to see how anyone has voted for the past many years: 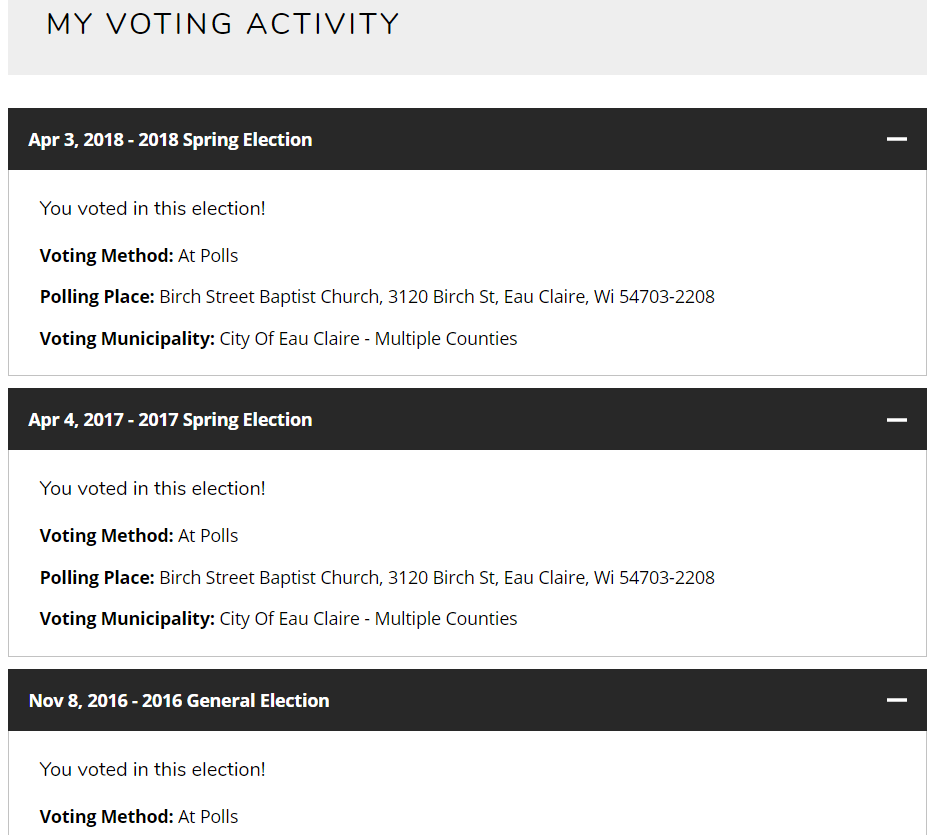 This history gives information on every election back to the Presidential election of 1996. The only thing a person needs to view this information for any person is their name and date of birth.

So, how could a nefarious person/group use this information to effectively conduct a voter fraud operation with minimal chance of being caught?

Well, if they could see my voting history and notice a pattern going back to 1996 that I have only ever voted in a Presidential election and have sat out all mid-term and local elections, they could use that information to target me as a good voter to impersonate during those elections that I am not likely to vote in.  Keep in mind, it’s likely an impersonator would be caught if they walk into a polling place and claim to be someone that has already voted…or the real person comes in after the impersonator and it is then realized that fraud had occurred. However, if the real voter is very unlikely to come in, then it is very unlikely that anyone would be the wiser to the fraud.

It would not take long for a group to develop a list of such targets in a Congressional District or a State and when elections are being decide by only a couple hundred votes (or fewer), then it’s not hard to see how this can have a very real impact even if minimal fraud.

Now, is this likely? Is it happening out there already? Who knows? If we don’t check for ID, there is no way of knowing, so it’s easy to say that there has been no known cases of it. But the point is, it most definitely can happen. That vulnerability in our election system exists. And we know it exists. Would it not be extremely irresponsible to allow it to continue to exist, simply trusting that nobody would abuse such a thing?

There are a few other very real vulnerabilities in our elections…some may not fit the actual definition of “fraud”, but they definitely alter the integrity of free and fair elections. I will cover some of those issues in a separate upcoming article.

About Steve Wood 255 Articles
I am a husband, a father, a small business owner, a veteran, and a Citizen of the United States. As my avatar depicts, I believe The People need to relearn and focus on the basic principles that our Republic was built upon. My contributions here will be geared toward that end. Please join me in rational, civil discourse.
Twitter

?"The best part of waking up is https://t.co/d8RcqnFtyD in your cup!" ☕️ pic.twitter.com/GzJFCddhin